Fifty hand-carved torches are blackened and charred.  They hang upside down from golden string in a giant clump. The leftover carved shavings sit in a large pile below, while above are gold embellishes and small tags. 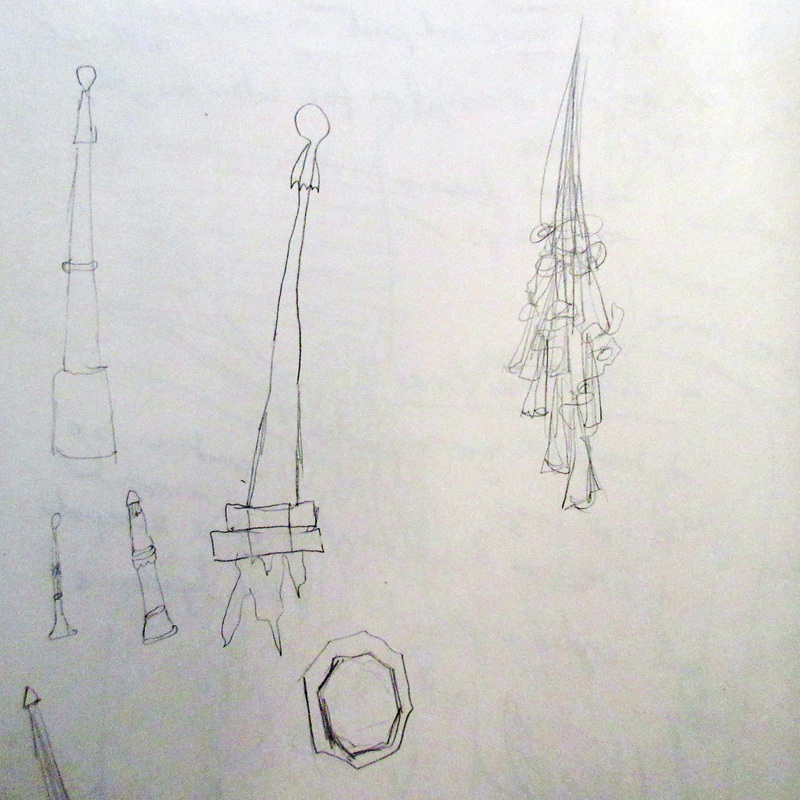 Today I made a major hike to Bernal Heights park to collect branches for my upcoming installation. My goal is to have 50 branches with a couple for practice. They were heavy so I ended up with just 10 branches. Strangely there was an empty black frame leaning against a stump, so I took a self portrait photo. I will visit the park every week. 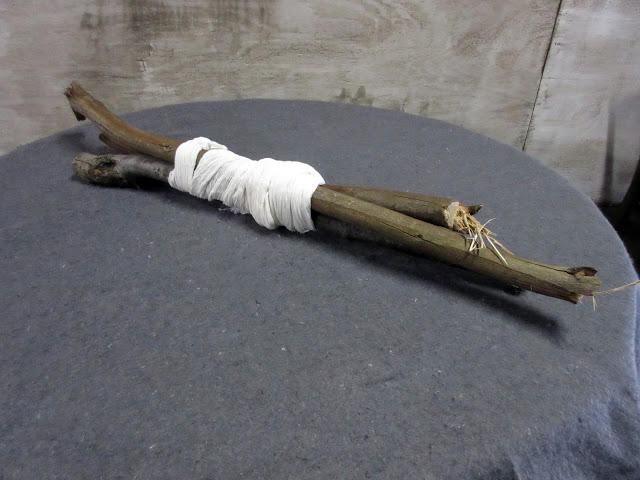 Today I worked on a couple of experiments for two upcoming projects. The first involved carving 50 torches from reclaimed branches. I quickly realized that I need to figure out a faster way to carve them. Not only was it taking a really long time, but I eventually ended up with blisters. I will visit the hardware store soon to see what I can find to help.

The second project was to start attaching broken mirror bits to an armature. I also realized that it was going to take much longer than anticipated. I need to add a lot more shards to the layers on the neck before I can move up to the head. 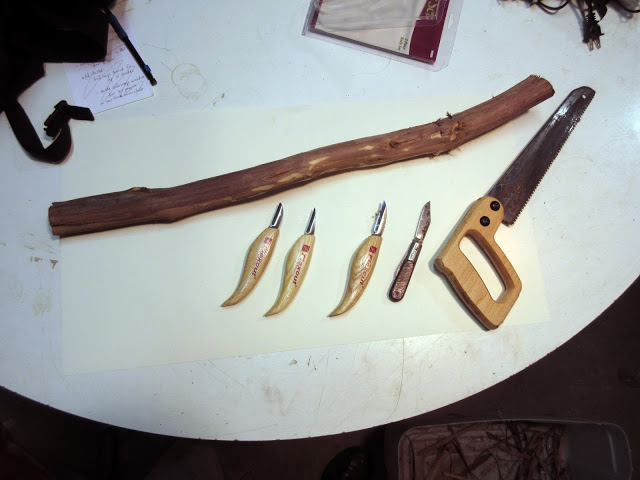 Collecting my tools and preparing to carve. 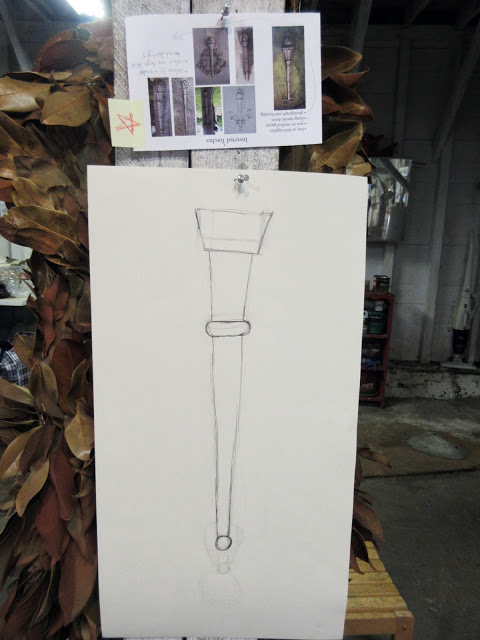 Make a rough sketch of torch. 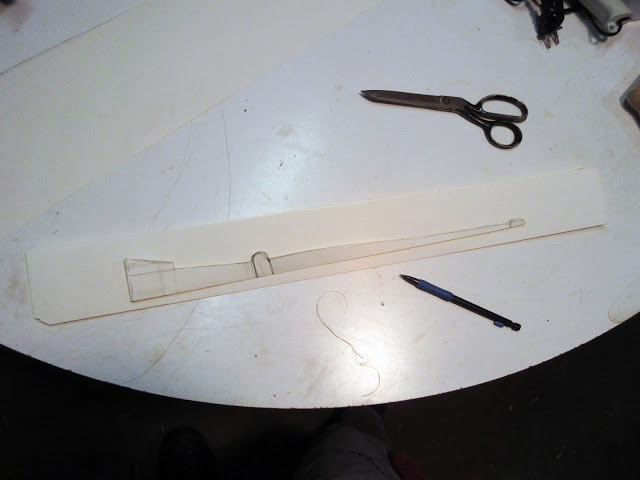 Making a more symmetrical torch pattern by folding in half. 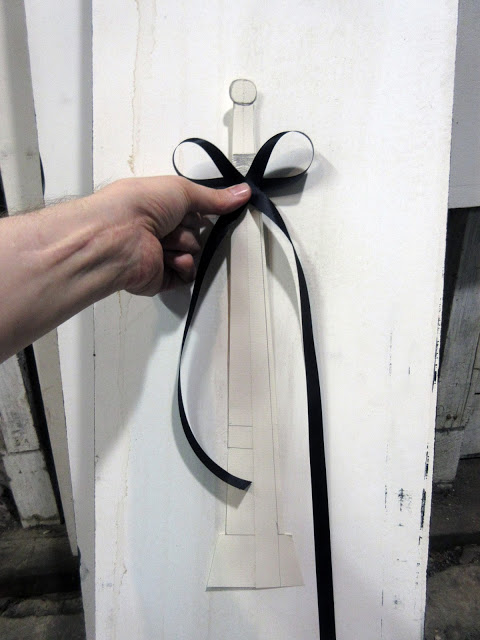 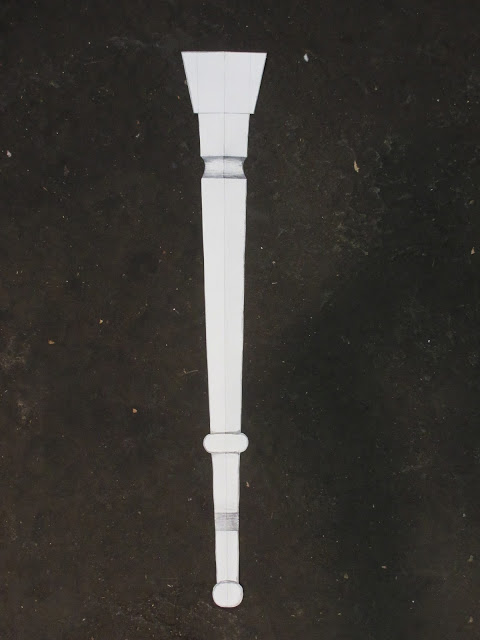 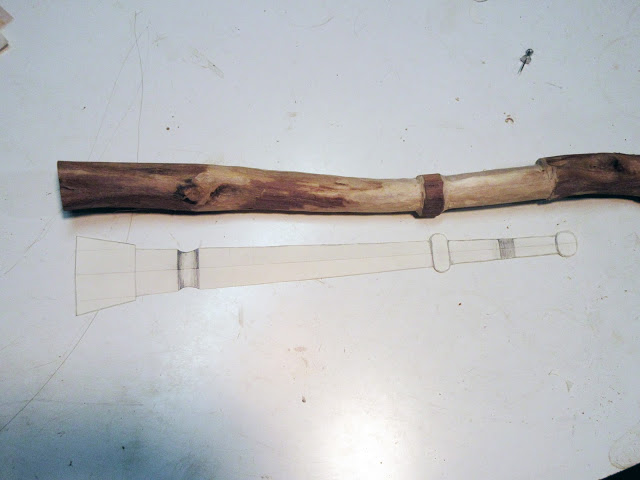 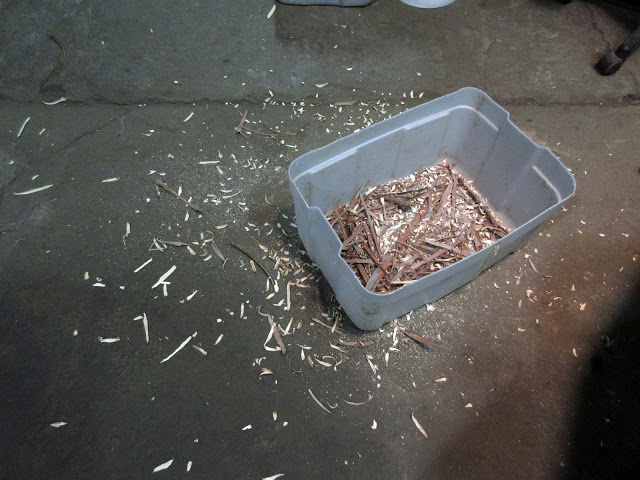 ​ I performed an experiment by gold leafing the end of a stick and lighting it on fire. I was surprised that the gold leaf burnt up. 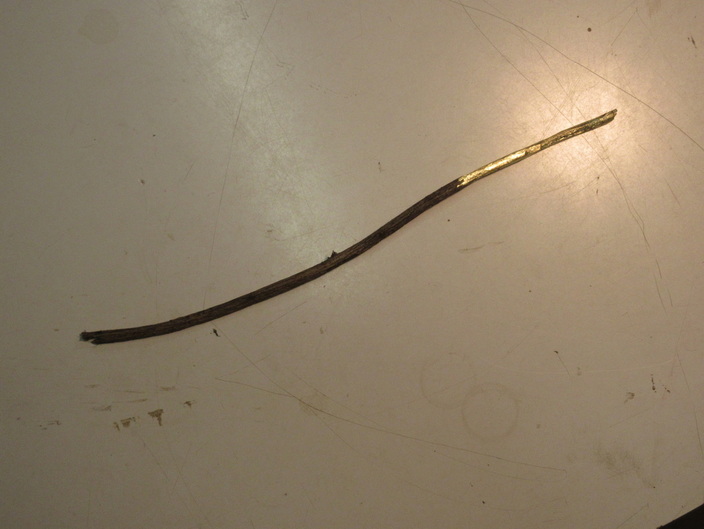 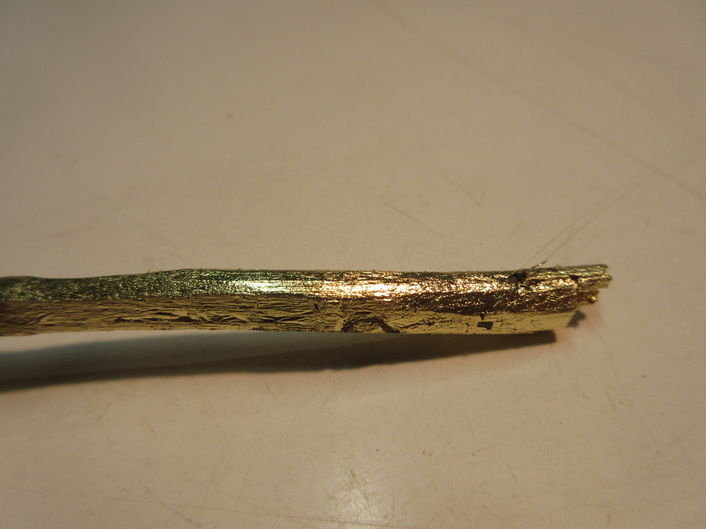 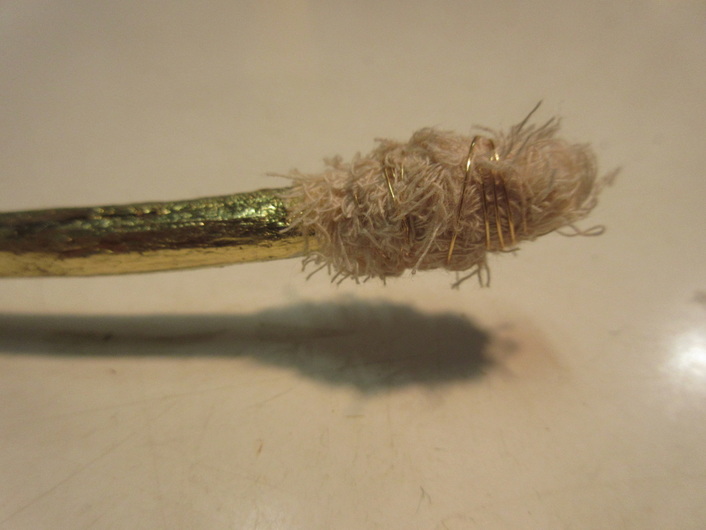 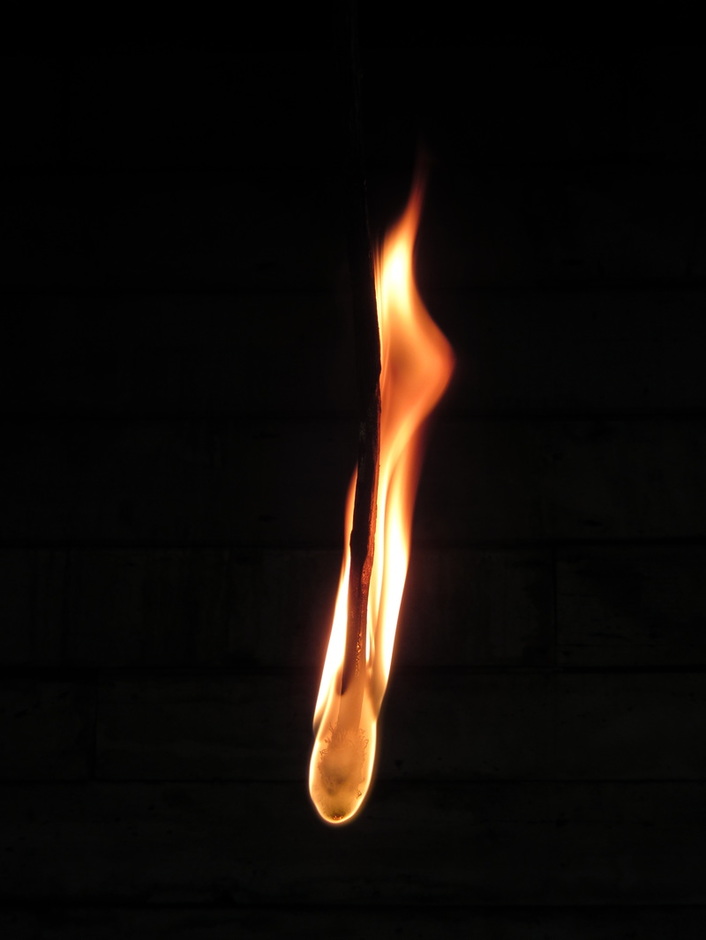 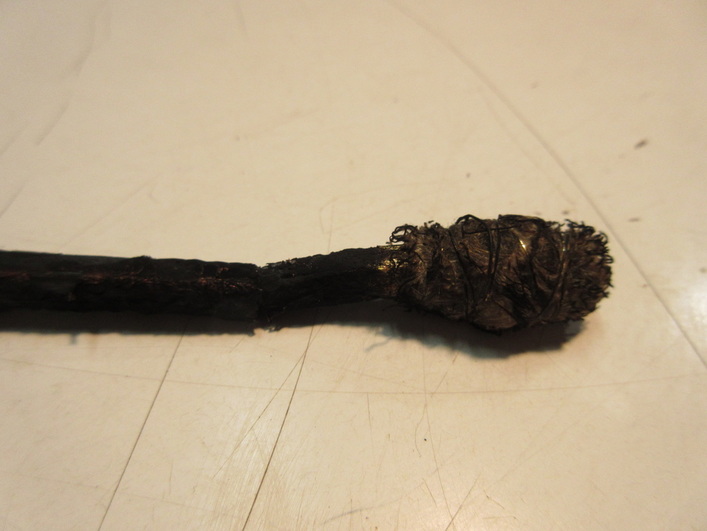 ​I've asked my friends for help to figure out the best technique and tool to use for my torch project. I decided to try using a draw knife. I ordered one made by Timber Tuff and the quality was absolutely terrible– the right handle was not secure and the blade was poorly made. I then ordered another one. 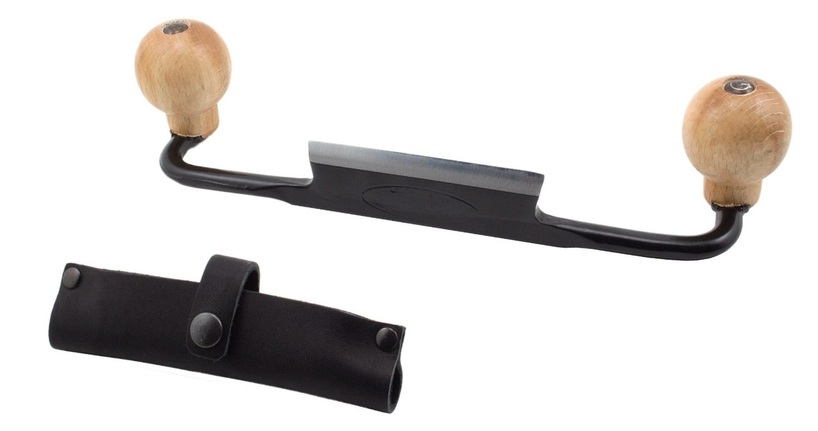 I tested the new and more expensive drawknife. It worked really well creating a second torch. I need to sharpen it, so I will make a miniature tabletop with sandpaper. I may also have a different plan for the  ball on the end. I will create these later and glue them on. 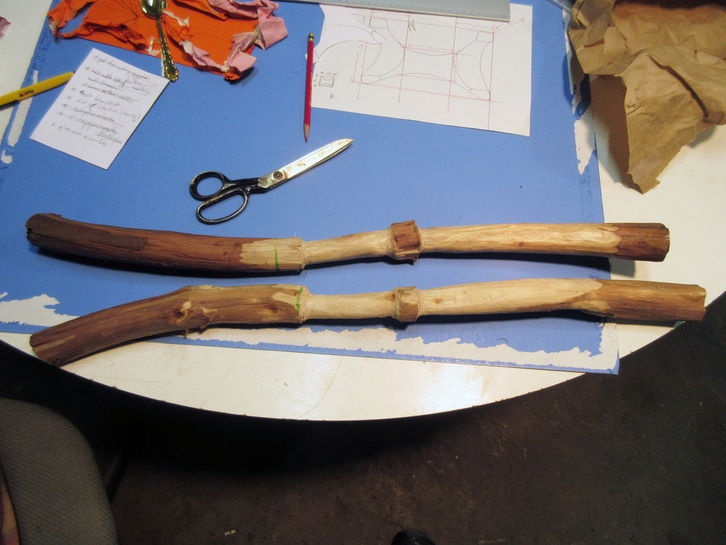 ​I finished constructing my knife sharpening stand and spent about 45 minutes beginning the long task of honing the drawknife. I need to spend another session getting it super sharp, but it's getting better. 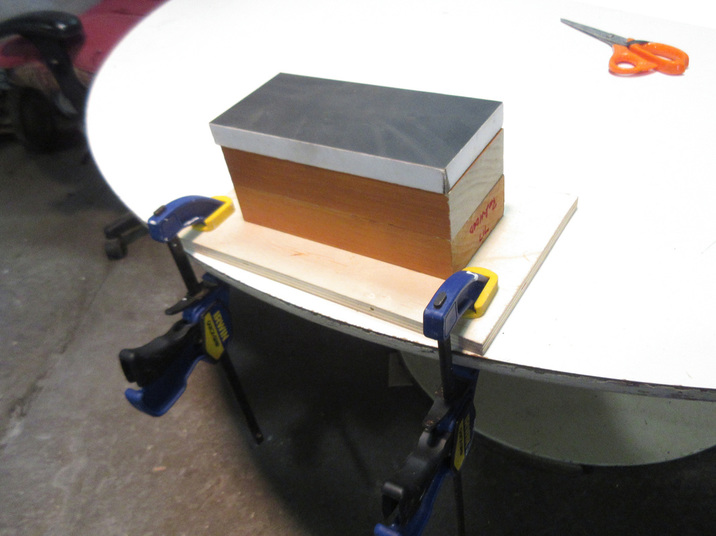 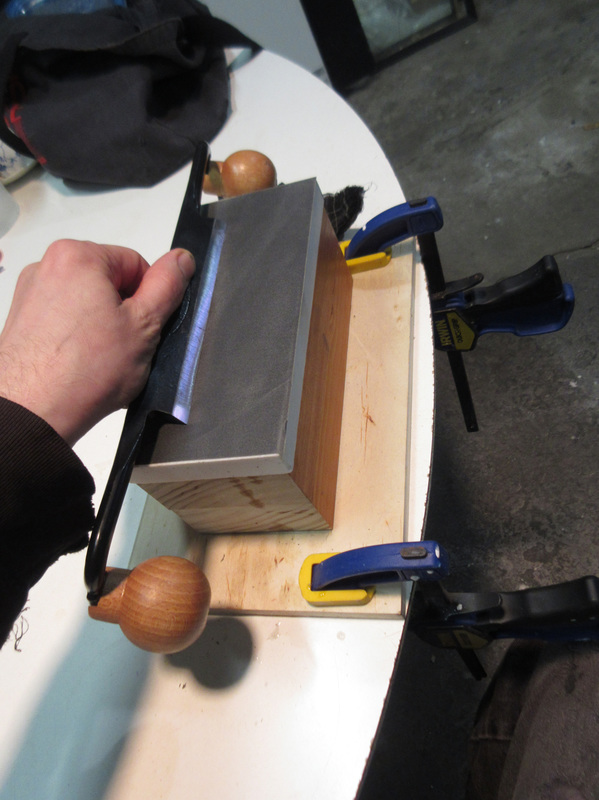 Then I used the freshly sharpened knife to finish carving two torches. I'm excited about the mistake that I discovered. There are curved wood burs that collect all around the neck of the torch and at first I began to remove them, but then stopped when I realized how excellent they look. 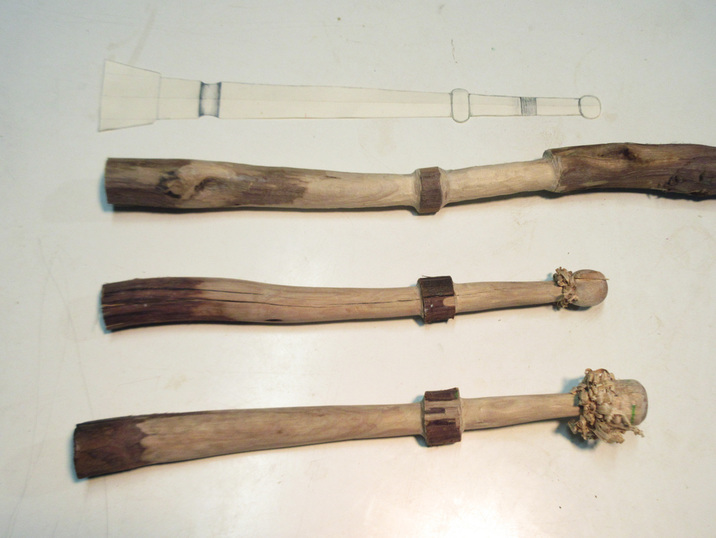 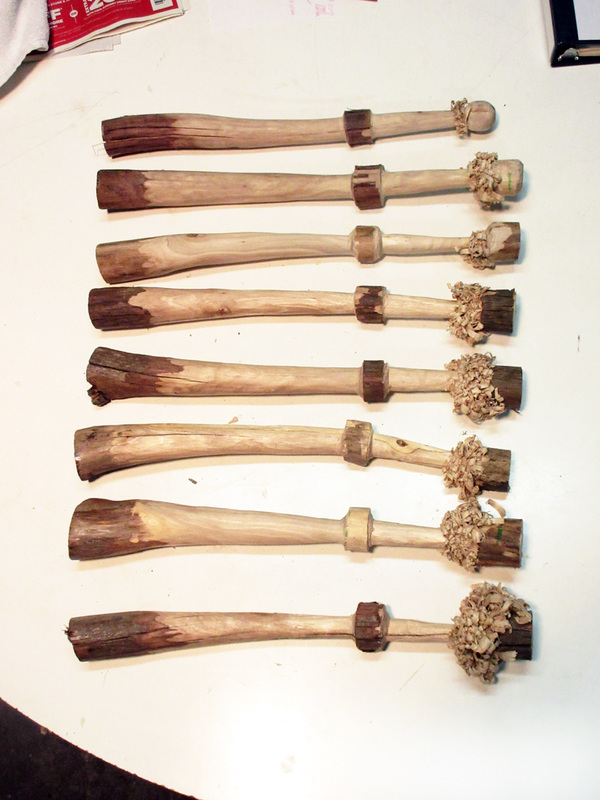 Tonight I worked on one of the first tops of the torches. This wood carved MUCH easier than the handles. 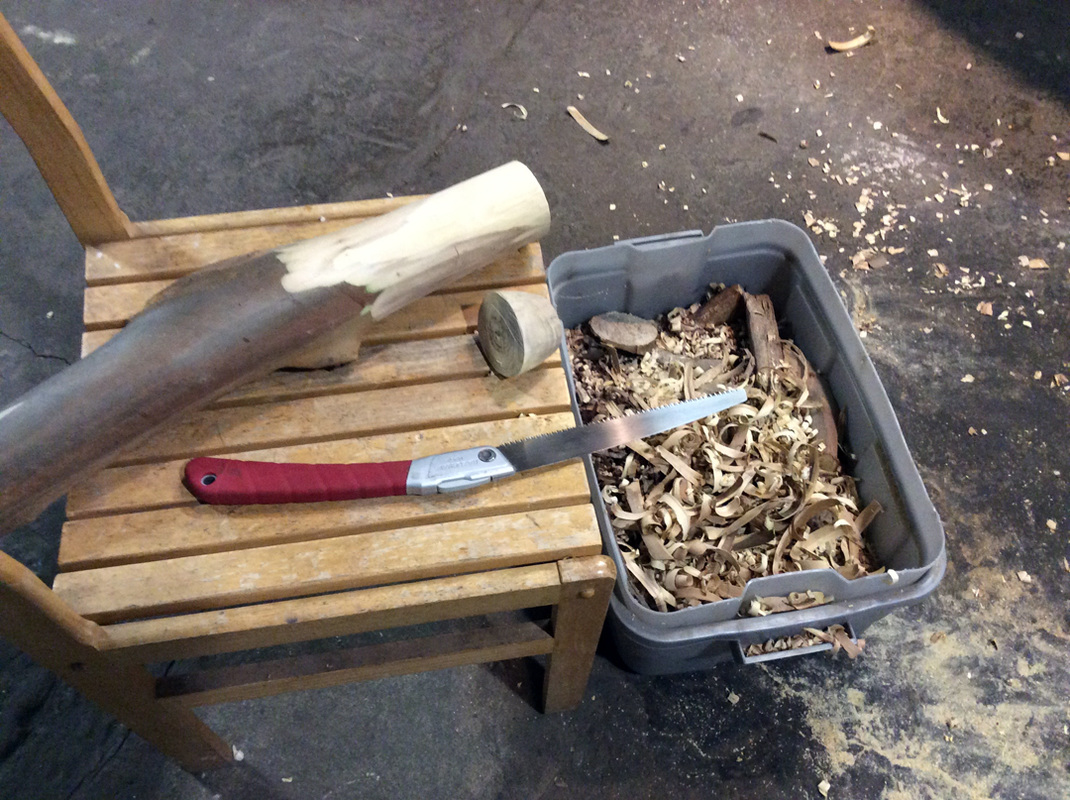 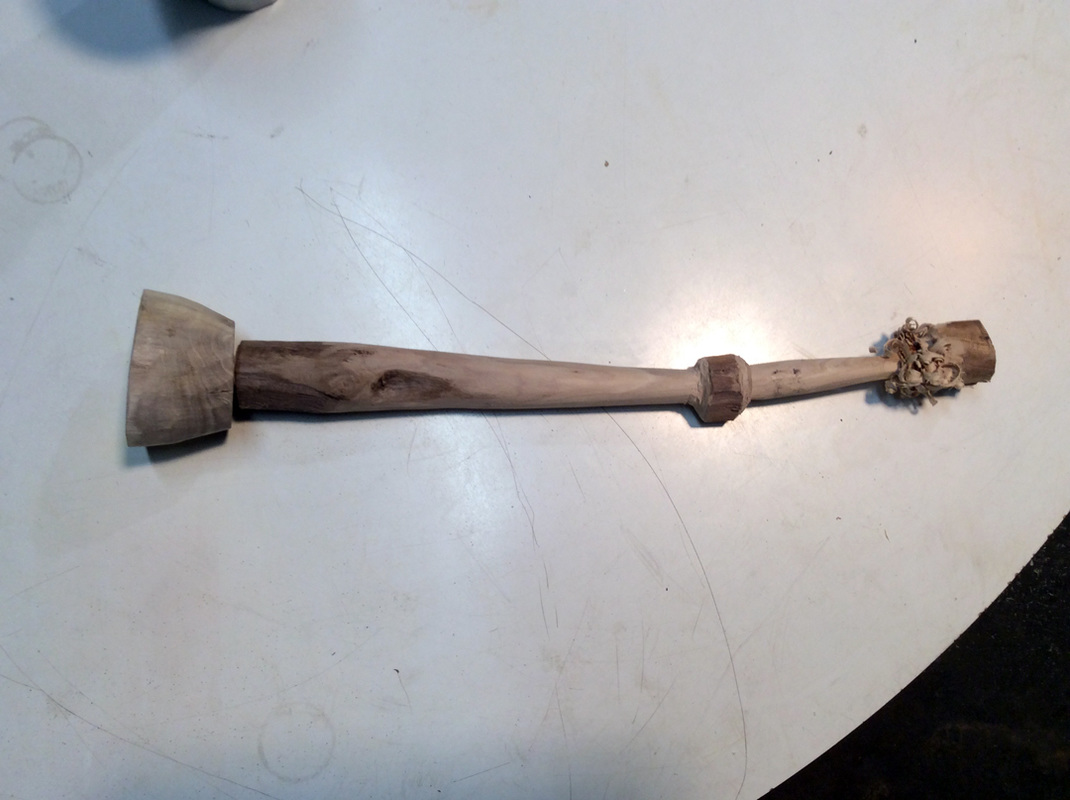 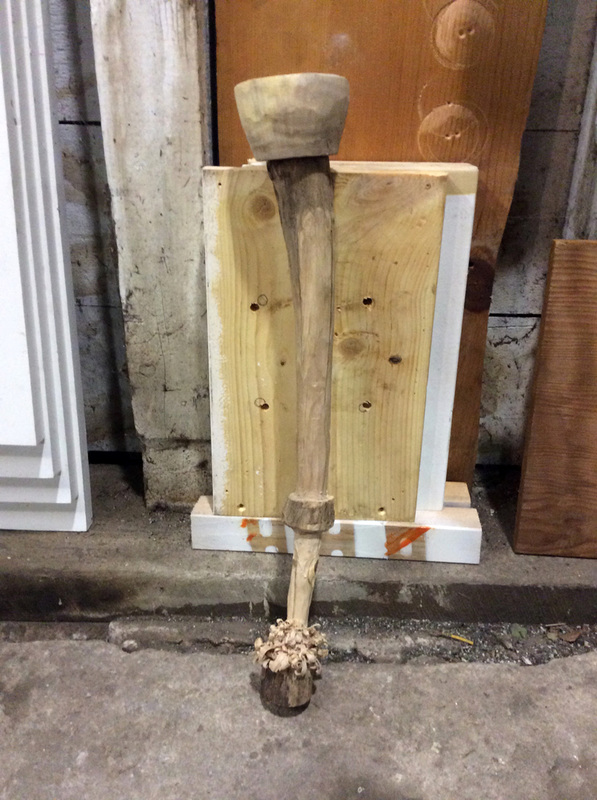 I started by unsuccessfully attempting to drill out a large hole in the wood piece that I recently carved. I tried several different methods and still have not figured out how I am going to accomplish this. While problem solving, I sketched this quick fix using metal sheeting. Not sure I like it, but it's just an idea. Perhaps I'll use a flurry of wire instead? 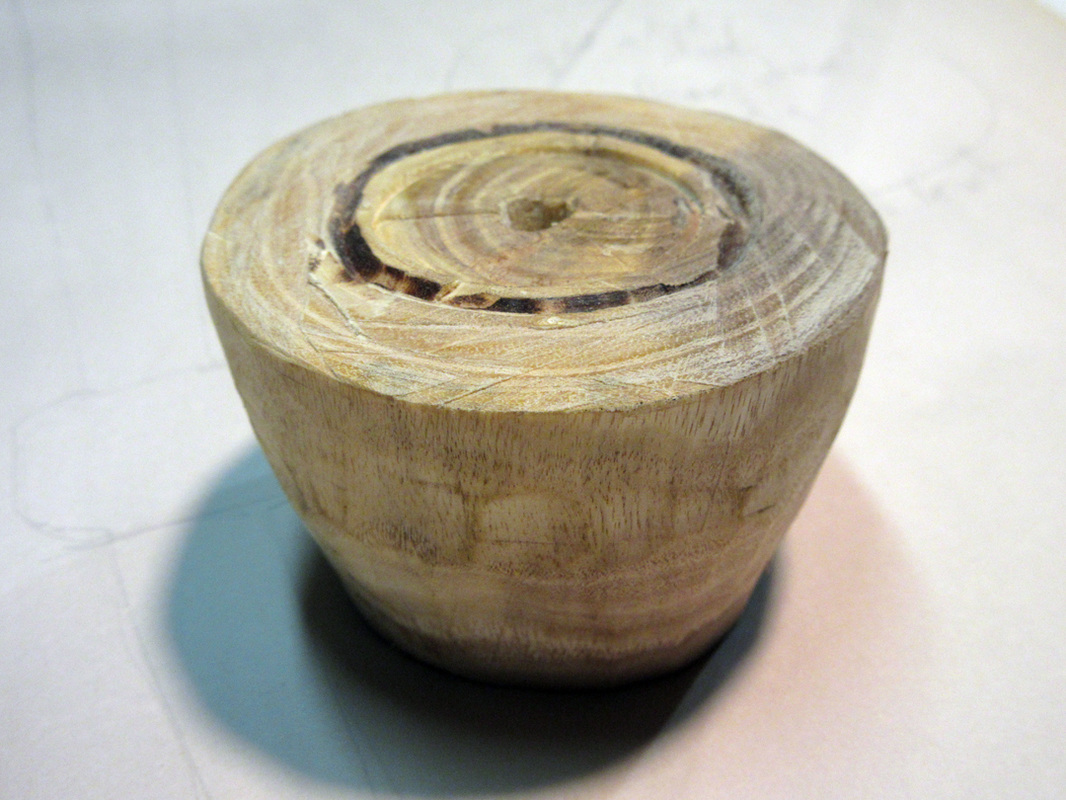 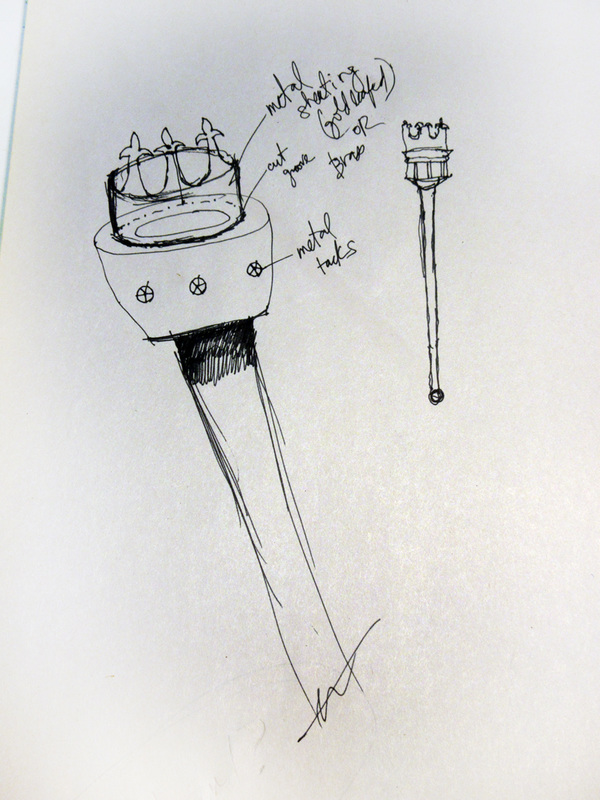 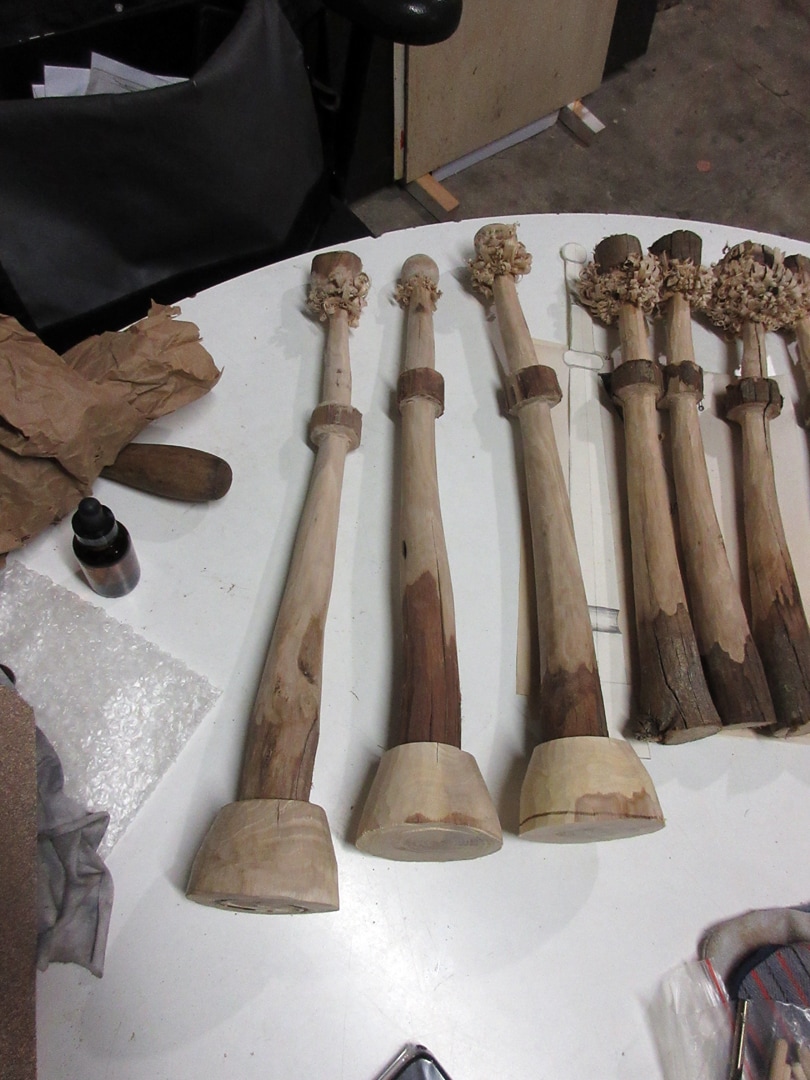